A tattoo artist by trade, a creative spirit by nature, a chronic doodler by design and a modest scholar at heart, Hannah Pixie Snowdon has attracted an immense following with her array of creative talents and beautifully ornate designs.

Trust us when we say that you have seen Hannah before – she is arguably one of the most reblogged faces on the internet. You’ve likely stumbled across one of her numerous fansites, or admired her tattoos. Or perhaps you’re familiar with her partner-in-crime, Bring Me the Horizon band frontman and fiancé, Oliver Sykes.

So we’ve had our eyes on Hannah for awhile – it’s hard not to, after all – she’s a mega-babe, having even done some side modeling projects, including for Syke’s clothing line, Drop Dead.  But the real attraction is her dedicated work ethic and positive approach to her craft. Despite her popularity, Hannah remains somewhat elusive; her Instagram account is about as close of a look into her private and inspired life as one can explore. Until now. We spoke with Hannah about some of her recent travels and sources of inspiration, as well as her big plans for 2014 (read: the launch of her own tattoo project – Black Stabbath)! 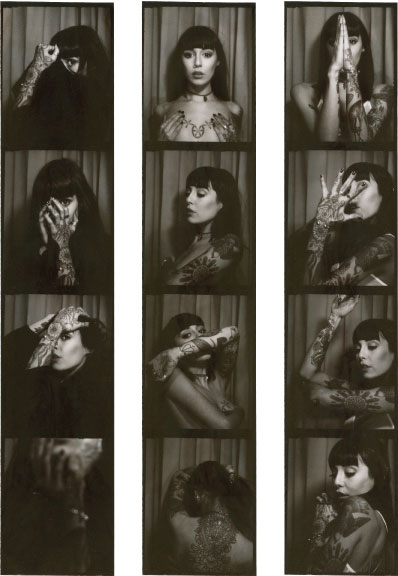 Hannah: I was always very academic-focused in school, so I think everyone – my parents and myself included – assumed I would go into something pretty different haha! I toyed with the idea of being a clinical psychologist for a while; People fascinate me and my parents are both in the medical field, but my passion has always been doodling in one form or another. 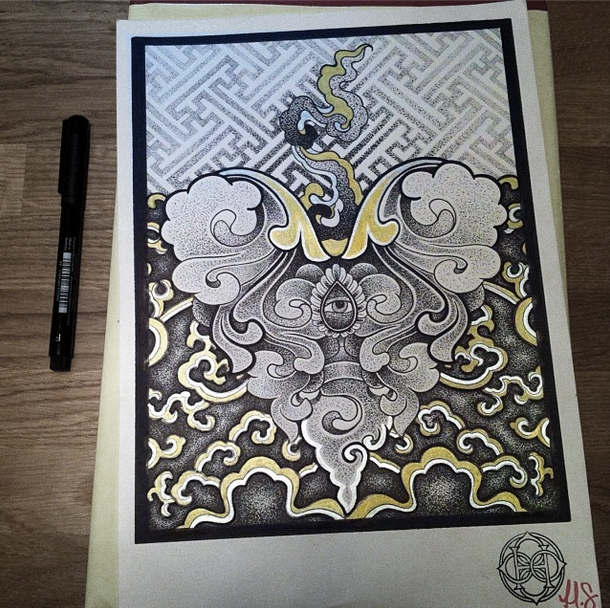 CULT: What inspires you to create, be it drawing or tattooing?

Hannah: Sometimes days go by where I remain uninspired, then all of a sudden I’ll have a billion ideas at once. I’ve learned it’s best to jot them down right away and come back to them later, to see whether I’m still into it. I find traditional art from around the world the most interesting, particularly stuff with an asian influence. I’ve also learned to surround myself with people and things that continuously inspire me and make me happy. Traveling is a massive influence on my work as well. I feel grateful that I’ve managed to see so many places already, and I plan on doing a lot more of that! My mum was amazing when I was little and took me all over the place. I bloody love her. 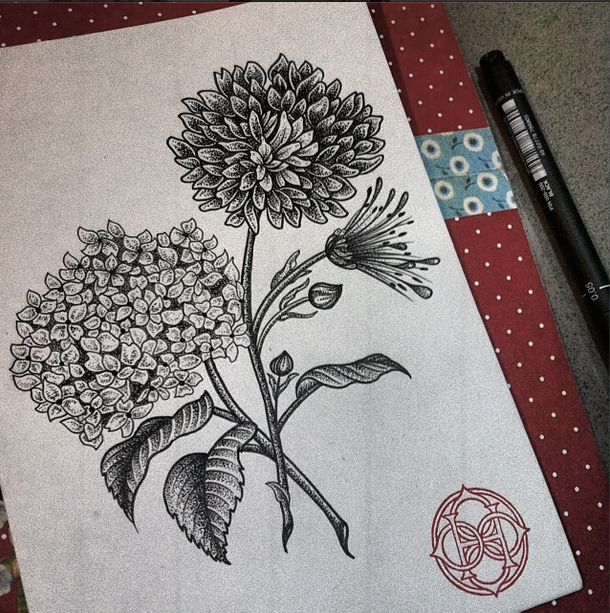 CULT: When do you feel like you established your current artistic style?

Hannah: I’m not actually 100% sure! I feel like in the last year though I’ve really come into my own. I was always quite unsure of myself and I think my work reflected that. I’ve still got a long way to go and I’d like to think I will continually grow and improve and evolve in myself and my work – but I certainly have a lot more confidence in myself now. The less I seem to question things, the more they seem to work! the places I’ve traveled in the last year reflects a lot of my work too – Vietnam was particularly beautiful and inspiring.

CULT: Who/what are your sources of inspiration?

Hannah: I love books! I have a bunch of awesome books that I use regularly for reference. Books and traveling. Traditional pattern work, sacred geometry and ornamental iconography from every kind of religion! I’m also very grateful to know a bunch of mad talented artists who I find very inspiring, and who I’m proud to call friends. Grace Neutral is a hand poking princess and one of my main inspirations as far as people go. 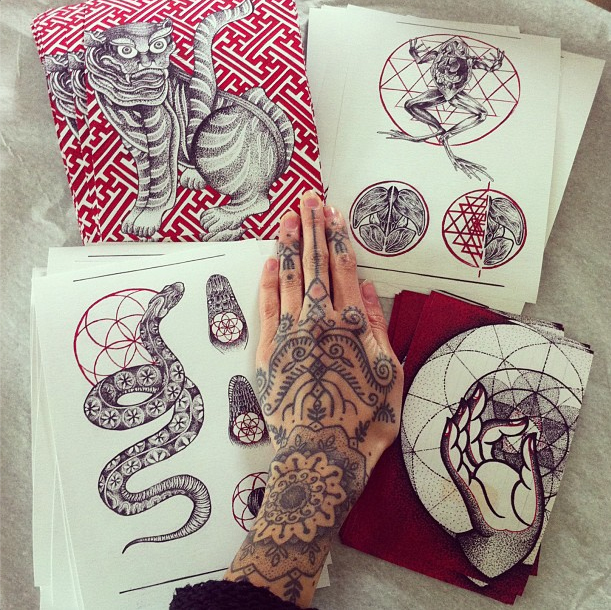 CULT: What’s your most memorable tattoo?

Hannah: I think it would have to be the flower of life pattern I did on my friend Plaz. It was about 2 years ago now, I think. After that tattoo, that design literally haunted me. It was so hard to do, yet the most pleasant tattooing experience that I can remember – it helps that he is an awesome dude who had a lot of faith letting me do it! The part it played in the following year of my life was insane. It was everywhere and in everything. It led me to believe that there is no such thing as coincidence and you really do attract things into your existence. Quite literally! 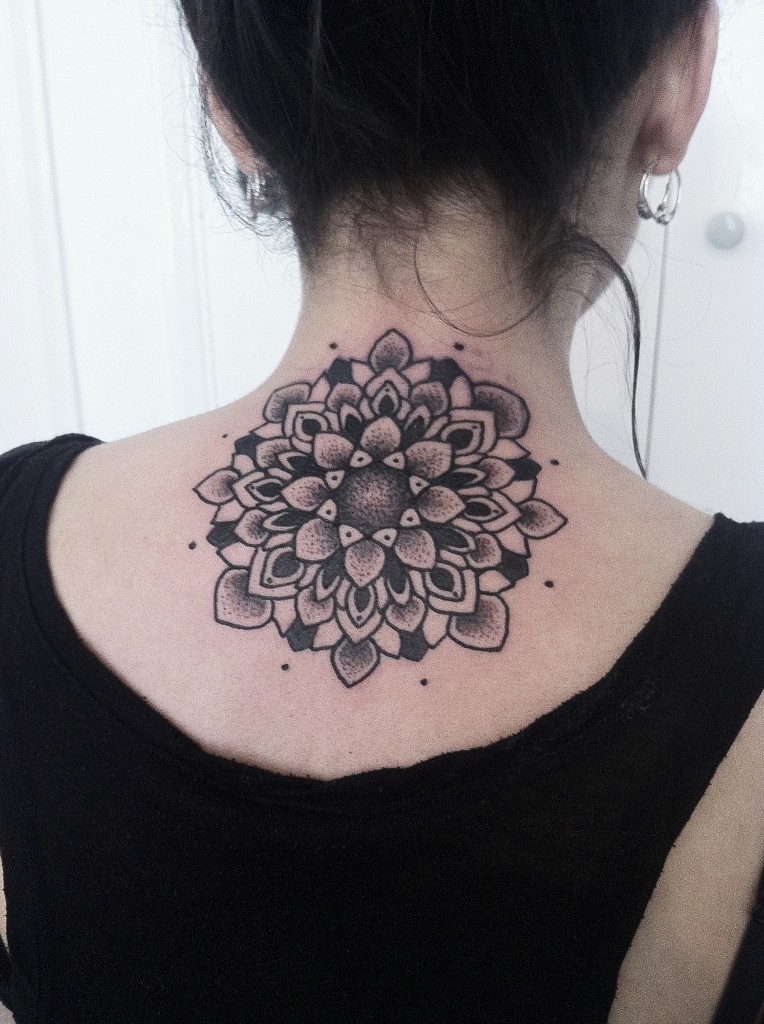 CULT: You present such a positive attitude and strong moral compass. How do you maintain that perspective, and avoid negativity and the pressures of conformity?

Hannah: Thank you! Its so nice to hear that. It’s funny really because there was so much negativity in my life up until about a year ago. Everyone always assumed I had everything so under control but the truth is I was so deeply unhappy in myself, which reflected in everything I did. There was a lot going on under the surface. I really had to start over. A lot of my friends couldn’t understand and I drifted away from so many people and situations I couldn’t have previously imagined living without. Ultimately though I really had to be selfish and stop putting other peoples feelings before my own.

Truth is unless you fill yourself completely up with love first you can never fully give it to anyone or put it into anything else.

As for negativity, it will always be there. Whether you are the most kind hearted or cold hearted person in the world, someone will find a reason to dislike you or what you’re doing.

The trick I’ve found is to live gently, love a LOT and learn to gracefully let go of things not meant for you.

You attract what you project – for the most part!

The internet is also so bad in so many ways – I try very hard to maintain a positive balance with it. It can be – and is – so useful for my work but I have such a love/hate relationship with it! I owe pretty much all my exposure to it, yet I see people interact with each other and they can be so fickle and largely false. It definitely changes people once they’re behind a screen. However, to push against it or be ungrateful for the work I get from it would be pretty stupid! Keeping focused on my work and keeping my head down is the best I can do in that sense. 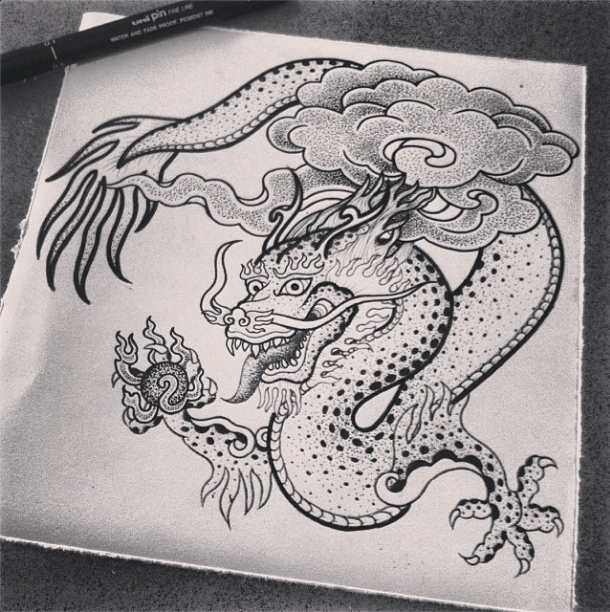 CULT: What can we expect from Black Stabbath? What made you decide to open your own shop?

Hannah: A lot of magic! I’m so incredibly excited and proud of it. I’m quite a reserved person and business can so easily break friendships. The tattooing industry can be so competitive and I like to dip out of it a little and do my own thing, this way I’m in no-ones way . It’s not going to be a ‘studio’ as such with all the bells and whistles; I don’t think I’m anywhere near experienced or talented enough to run my own studio. It’s more just my own little private space to create in! I’m also hugely grateful that I have such a supportive partner who gave me the courage to do it in the first place, he really gave me the extra push in the right direction.

CULT: Your perfect day consists of…

Hannah: This is a tough one because I feel like the honest answer is a bit too cheeky to put online! haha. Obviously being somewhere beautiful and warm with my favourite people would rule, but sometimes when I wake up in my big fat bed with a totally clear mind and my stupid little dog, serving as a living breathing hot water bottle, there is literally nothing better. Throw in some vegan banana oatmeal chocolate chip cookies and a doodling sesh, and I’m game! Jet skis are awesome too.

Hannah: Be excellent to each other, and party on dudes! (Bill and Ted – philosophical geniuses) 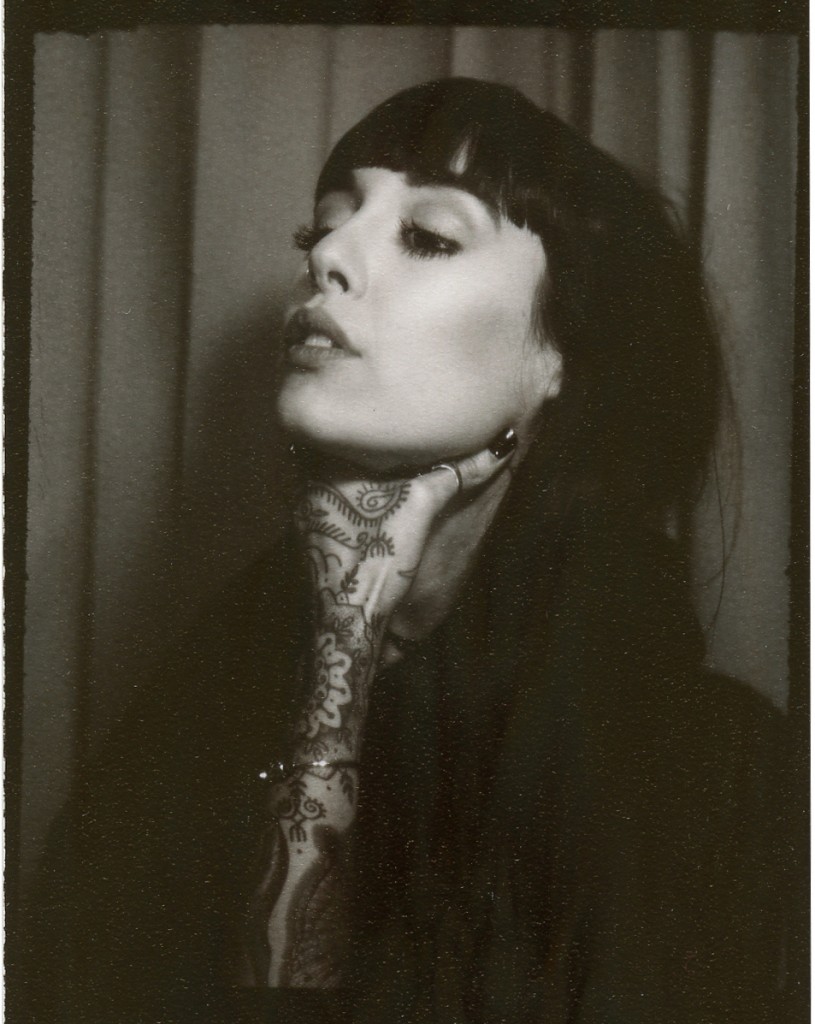 *Young Blood is a series that highlights innovators and creative visionaries; youthful spirits employing their talents and visions across diverse fields of practice. The rebels who refuse to play by the rules. The ones making a difference. The Young Bloods.