Redding, CA based vintage motorcycle lifestyle company, One Down Four Up, boasts all of the adventure envy we need to start packing our bags, taking a page from owners Wayne Corbett and and Gabrielle Jones. The romantic duo wears a lot of hats, employing both of their talents between mechanics, photography, modeling and marketing. The results are drool-worthy one-off custom vintage motorcycles paired with inspiring, adventure-evoking photos to do them justice.

After being laid off at work in South Carolina, Wayne embarked on an epic 3,000 mile bike trip across the country to San Francisco to start anew. Soon after, he would land a job and the girl of his dreams (Gabrielle), and the rest is history – well, sort of. Read their inspiring story below as they went from building bikes in a bedroom to owning and operating a business, and as we ask Gabrielle on what it’s like to be a babe in the bike biz. 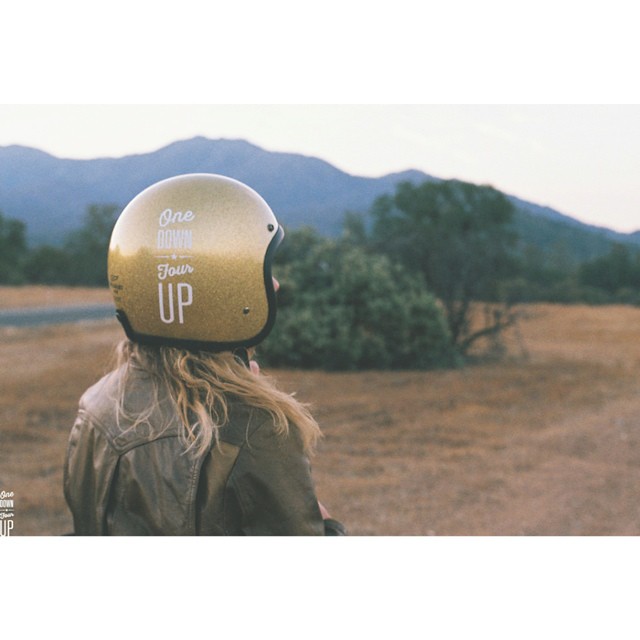 CULT: How did the two of you meet? What brought you to Redding, CA?

Wayne: Gabrielle and I met in San Francisco where we lived for a couple years. One of our first bikes was built in the downstairs bedroom of the house we were renting. We weren’t able to build the bike we wanted with the space we had so we decided to move up to Redding where Gabrielle is from and where we could afford more space for a proper garage. 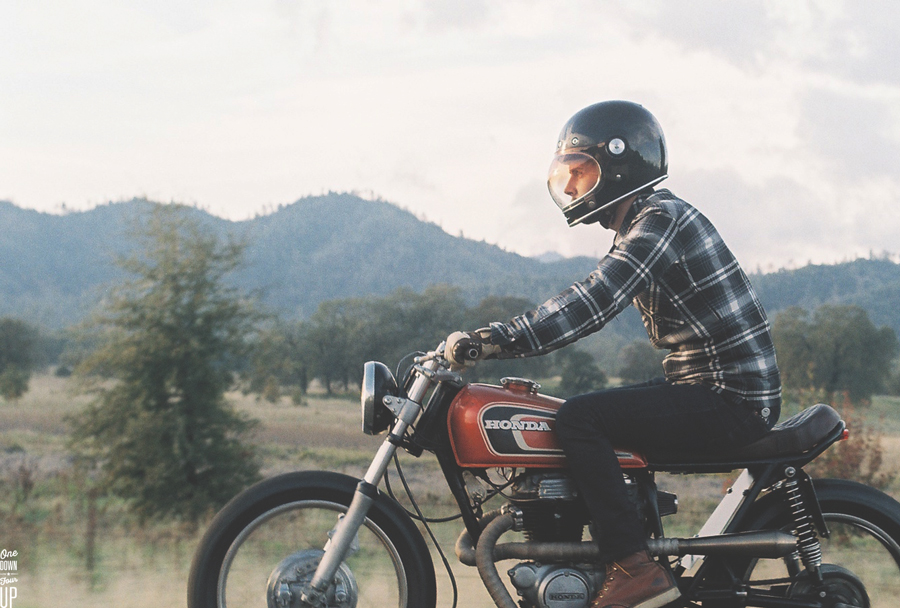 CULT: How did your backgrounds in design, photography, mechanics (Wayne) and styling and modeling (Gabrielle) lead you to start One Down Four Up?

Wayne: Before we started One Down Four Up we were basically doing the same things we’re doing now, One Down Four Up just gives us a specific direction and outlet for my design, photography and mechanical skills. I grew up working on everything from the tractors we plowed and planted fields with, to the boats we took to the lake, to the cars and trucks we drove – I’ve worked at my fathers repair shop too – all of these skills play a part in One Down Four Up. It seems like photographers/designers turned motorcycle builders is becoming a modern cliché and a good eye for design and aesthetics does play an important part in building a motorcycle but the mechanical aspect is what really interests me.

Gabrielle: I have always been interested in fashion, endlessly flipping through the newest fashion magazines. High end fashion was never accessible to me, so I started leaning towards a vintage thriftier style. The thrill of finding that perfectly broken in leather jacket or the tightest high-waisted Levi’s always kept me hunting. When I met Wayne I had never taken a second glance at a motorcycle as it drove by. I had only ever been exposed to old dudes on big ‘ole baggers or bros doing wheelies with a green mohawk stuck on their helmet, neither of which appealed to me whatsoever.

When I saw Wayne pull up on his 1976 CB750 with a open face helmet and a bubble shield I was in awe. The vintage bike fit right in with my aesthetic and I fell in love. 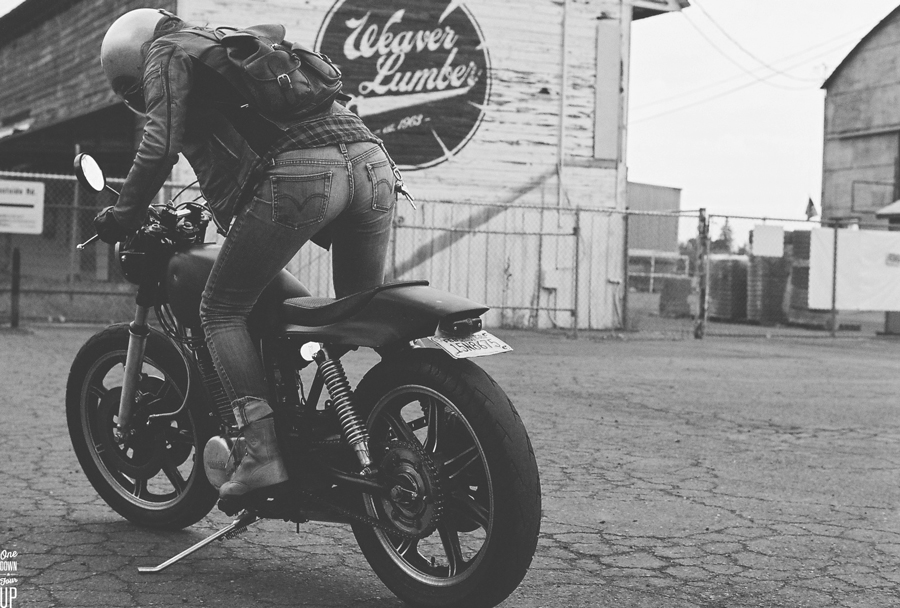 CULT: Why motorcycles – what about vintage motorcycles, specifically?

Wayne: My father had a Honda XL125 when he was younger and we always had it sitting at our house, he’s moved on to Harley’s now but we still have the old XL125 sitting at our house. The XL was my first introduction to older Hondas but what got me wanting a motorcycle of my own was my photography professor in college. He had a couple vintage BMW’s and rode them to work every single day, rain or shine; all he owned was motorcycles. His BMW was a very simple subdued clean motorcycle, I would stop and check it out every time I walked by it. Like his motorcycle, his photography followed similar ideas, always simple meaningful black and white; he preferred using his manual 35mm Pentax over an easier-to-use modern automatic camera. One night he was struck by a pickup while sitting at a red light, a week later he succumbed to his injuries. This is when I decided to get a vintage motorcycle of my own and build it with cues taken from his BMW. Tobias had a profound impact on my life and every bike we build and every photograph we take follows those same ideas: simple clean and functional.

Gabrielle: Well I guess I got into motorcycles because of Wayne, I never would have gave it a shot if I hadn’t met him. I really fell for it when I found the positive female movement that came along with the bikes. It is always “YOU GO GIRL!” versus the mean ways girls think about and treat each other in normal day to day things. It was hard in fashion because you were always too fat, or too short, or you didn’t have the right look.

But, with bikes it doesn’t matter if you are on a 125cc or a 1100cc, or if you ride in full gear or pasties and panties because you are AWESOME.

Wayne taught me a lot about how to work on bikes and vintage bikes are much more simple compared to new stuff. Everything is mechanical and right there in front of you to tinker with. I have always been surprised by how seamlessly our photos work with each other. I have always been drawn to natural light photography and I don’t know how to use a digital camera, so it worked out! 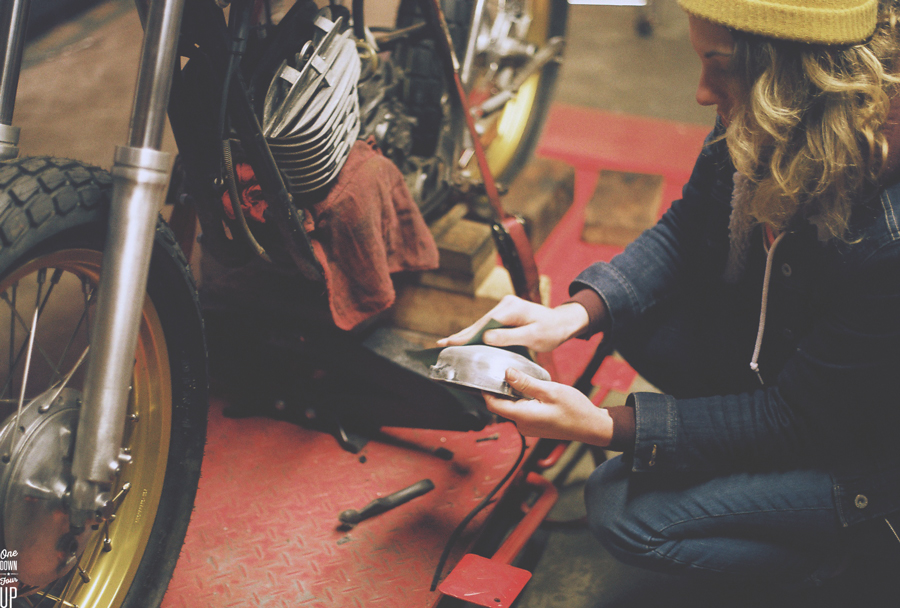 CULT: Do you remember your first bike?

Wayne: My first bike is the bike I still own, a 1976 Honda CB750f Supersport. I have ridden many bikes since owning my Honda and nothing beats the smooth endless power of these inline fours.

Gabrielle: The first bike I bought was 1971 Yamaha HT1 90cc. I fell in love with the little cutie. But, after a few months I needed a little more power. We still have it at the shop and let me tell you everyone who rides it has an absolute blast. 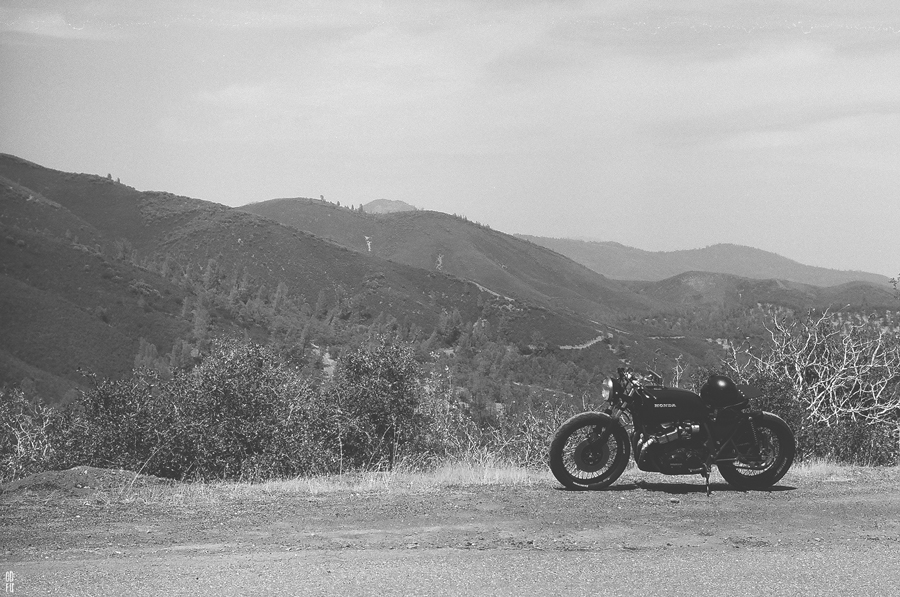 CULT: Wayne – what inspired your road trip from SC to CA? How long ago was that? What was the best (and worst) part of that trip?

Wayne: I decided to ride my motorcycle to San Francisco to look for a job. I had recently been laid off from my job in Columbia, SC and really had nothing to lose. I sold as many things as I could and left South Carolina mid-January of 2011. Winters in SC and much of the south are generally mild with the occasional rainy day or two so the plan was to keep my route as southernly as possible. I planned to average about 500 miles per day and make my trip in 5 days. The first two days were solid rain, running a bike with no fenders and an open oiled air filter in the rain is tedious, a lot of stopping and waiting for the air filter to dry. Once I reached Texas things dried out but to make up time I lost in the rain I changed my route further north.

This took me through some of the most dangerous conditions I’ve ridden in, strong cross winds and blinding dust storms. The cross winds were completely unpredictable, one minute I would be hanging off the side of the bike turning into the wind and the next second the wind would be dead throwing me into a hard turn.

New Mexico was a bit of a relief but Arizona was the final struggle. Because I headed north in Texas I found myself crossing through mountains in January. The ground was covered in snow and the ambient temperature was 19 degrees. With the wind chill of riding 70 mph theres no telling how cold it really felt. I made the trip in 6 days and eventually found a graphic design job in SF where I worked and soon met Gabrielle. 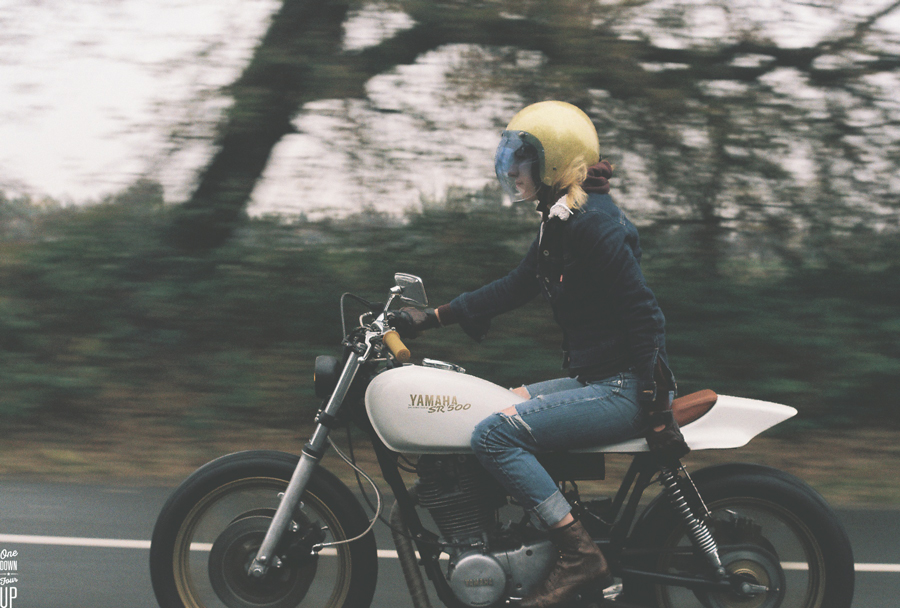 CULT: Gabrielle – are there any challenges being a babe in the business of motorcycles? What would you tell gals who want to learn how to ride?

Gabrielle: It is really tough, well maybe more annoying, for a girl in the “man’s world” of motorcycles. I am the only woman in our group of riders and I think men and women think differently when it comes to riding. I am not the fastest or the slowest in the group, so I end up riding by myself in the middle enjoying the scenery. I cannot tell you how many times I get asked “can you start that bike yourself?” or “You know that’s a man’s bike don’t you?” I hear a version of those statements EVERY time I ride. My bike is a kick-only 500 single and the compression stroke is nearly impossible to kick through if you don’t do it right. Let me tell you, I bet half the men who ask me if i can crank it up, couldn’t kick over my thumper.

I wish there were more women who want to get their own bike rather than just crushing on boys who ride them.

As much as I do enjoy riding pillion with Wayne, I knew I had to get my own. Ladies, you can do it! 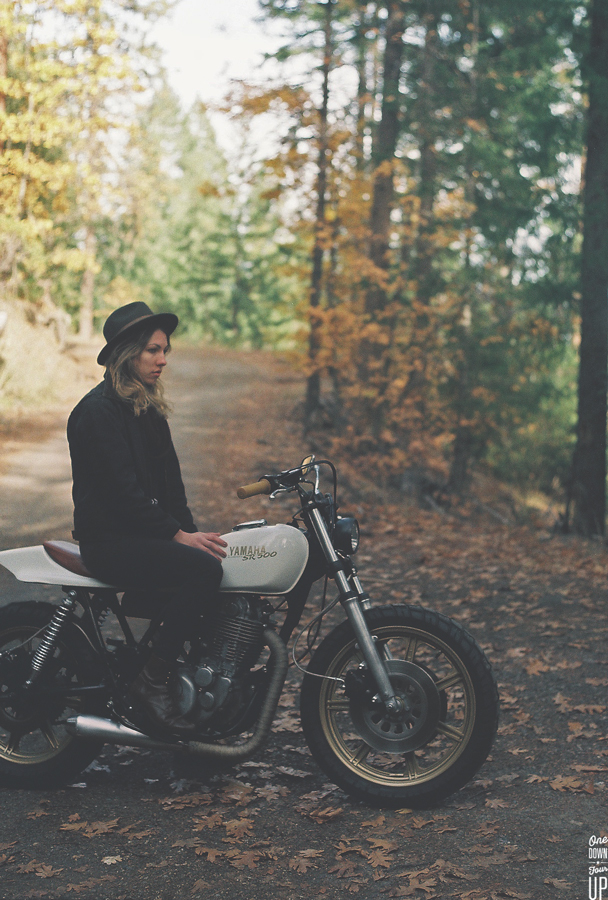 CULT: Favorite memory from the road:

Gabrielle: There is a certain point when you are riding and your mind goes blank. All you feel is the road and all you hear is the wind and the thump of your motor. That feeling is my best memory from the road. 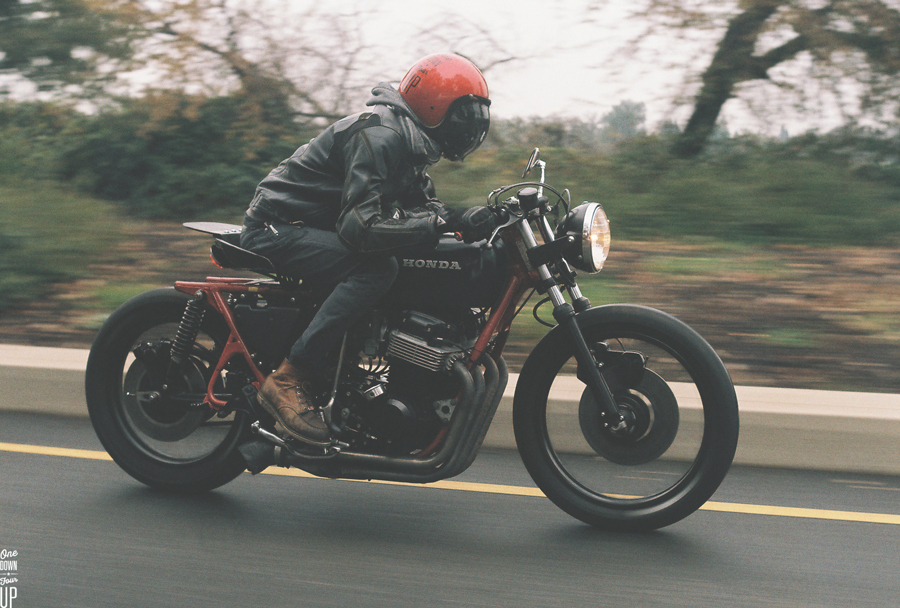 Wayne: The biggest advice I can give to all first time riders is to keep your ego in-check. I have seen it so many times with new riders (usually guys) who become overconfident in their skills or trying to show off and get themselves into bad situations i.e. missing a turn and going wide into the oncoming lane or breaking traction and not knowing how to control it. If you’re a novice rider you shouldn’t be leading a ride, crossing the center line in turns, making overly zealous passes, or trying to show off. If you stay behind an experienced rider you can watch their line through turns, their braking and downshifting and the way they handle their bike.

With the growth in popularity of vintage motorcycles it is bringing in a lot of new riders which is great but unfortunately it does bring in some who care more about being seen on a motorcycle than actually riding the motorcycle. For me motorcycles aren’t a trend or the next cool thing to do and when individuals get into vintage motorcycles and promote it for the wrong reason it shows a lack of respect to those who actually enjoy being out riding their motorcycles.

Gabrielle: As a fairly new rider myself, my advice is to just try to get over that initial fear. It is better to take it slow, like learning on a smaller bike than trying to get a huge bike right off the bat. Just because you ride a motorcycle doesn’t mean you have to surf it or do wheelies. I find riding safe is just as fun as riding half naked down the interstate doing a handstand on your seat. It should be more about making yourself happy rather than trying to impress others. 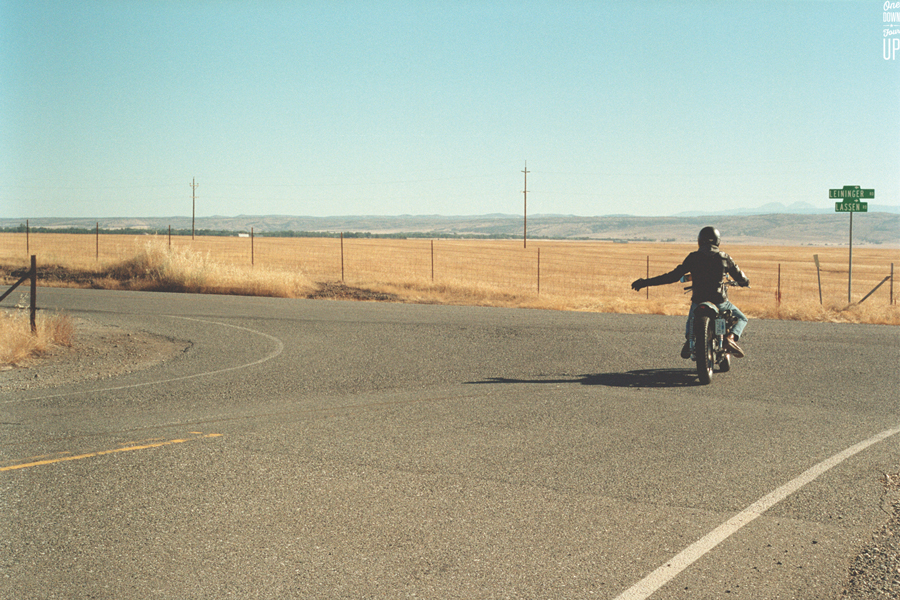 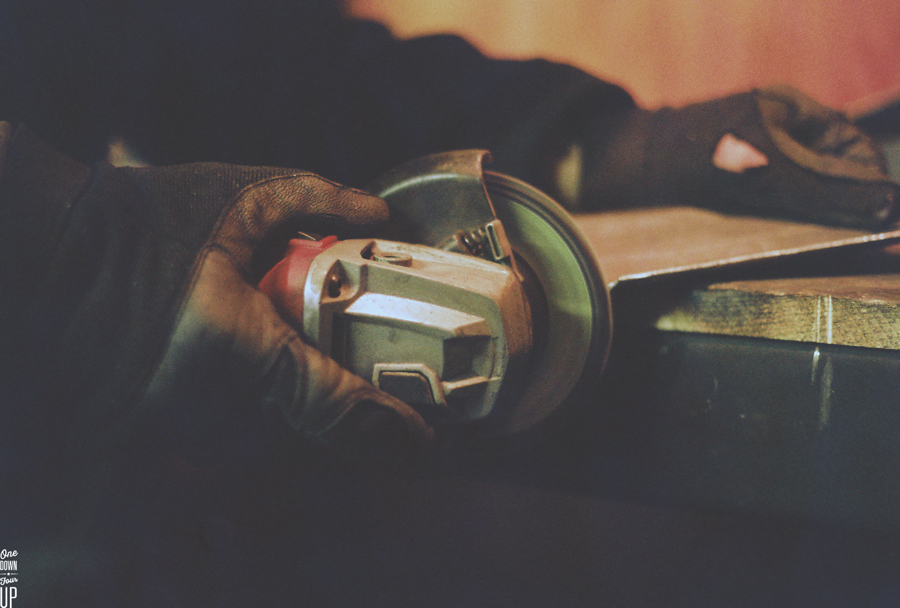 Gabrielle: Confucius says, “It does not matter how slowly you go as long as you do not stop.”

One Down Four Up

Southern California has a reputation for its esteemed skate culture and surf-inspired communities. With such a strong rep at stake, we look to the…