It was raining – no, it was down pouring – and we were late. The narrow, steep Big Sur roads were difficult enough to navigate, and the thick wall of December rain and fog further obstructed their intense twists and turns. We kept our eyes peeled for the fork that would indicate our destination – a 180 degree turn that descended down a dusty driveway to the front gate of the Esalen Institute. A man in a bright yellow parka appeared from the side of the road. I felt my stomach float as my sweaty palms gripped the steering wheel – what did I just get myself into?

To me, this gate was symbolic. I had promised myself prior that I would leave a piece of myself behind here at this entrance – all of my unnecessary fears, insecurities, dramas and failures. I was in a sensitive state of transition, recovering from young unrequited love, and making some difficult plans for my future. Regardless, I vowed to leave all of these complexities at this gate and enter without hesitation.

Many misconceive that the Esalen is merely a place for old hippies, nudists and psychedelics – some even presume that it’s a religious or spiritual cult, but in fact, Esalen is very much the opposite.

It’s a place for believers and nonbelievers – an ode to modern bohemianism.

Ask any guest, past or present, and you’re bound to hear some powerful stories of reflection, realization, transformation and progression. The Esalen is a place of transition and an oasis where transformation is not anticipated but almost expected.

Founded by Stanford alums Michael Murphy and Dick Price in 1962 on Murphy’s grandmother’s cliff-side property, the Esalen was born from a breed of likeminded new age bohemians. Murphy and Price sought a greater connection in their relationship to the world having been influenced by and constantly in pursuit of the top of Maslow’s Hierarchy of Needs. (Displayed as a pyramid – the bottom of Maslow’s needs are the basic essentials of human life – food, water, shelter, etc. while the top – the ideal innate needs – being meaning, purpose, creativity, love etc).

The Esalen was serving up spiritual enlightenment for breakfast and people flocked from around the world for a taste. 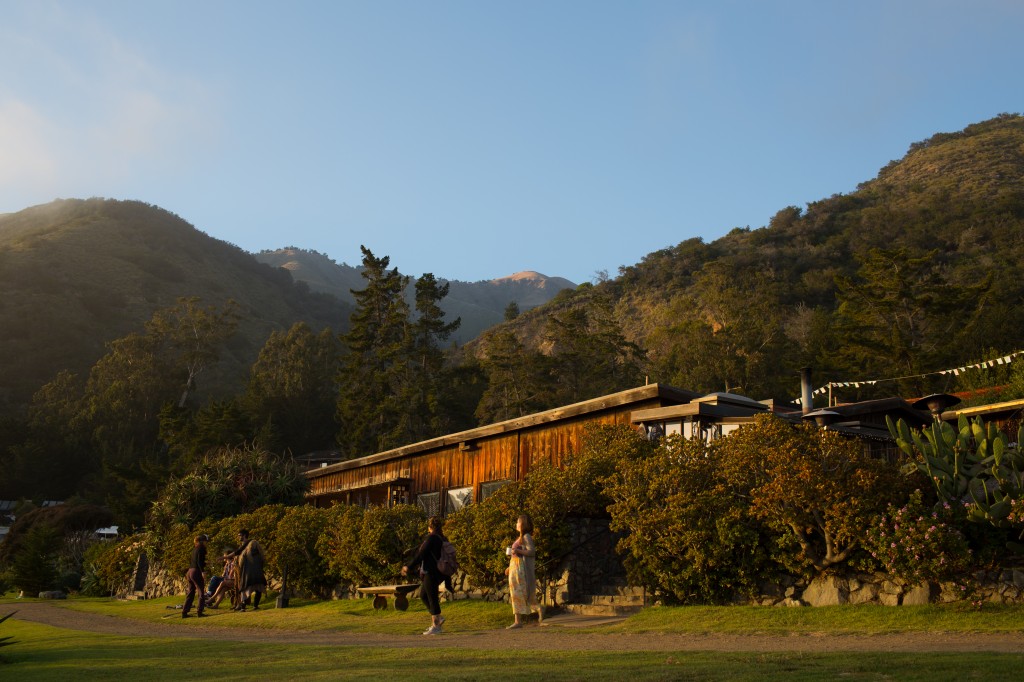 Known for combining East / West philosophies in its over 500 annual spiritual workshops, the Esalen ethos explores Aldous Huxley’s philosophy of “human potential” – encouraging guests, or ‘seminarians’, to experience and practice their place in life while advocating for positive social change. The Esalen is not an escape, but rather a place to be present.

The arts and crafts hut is open at all hours to encourage creative expression, the cultural yurt hosts yoga workshops, live music and other social gatherings, while the mediation hut is a silent recluse to reflect and detach. The hot springs provide a restorative place for healing, and the produce, spices and herbs grown in the campus gardens feed guests in farm-to-table fare which can be upwards to 400 people at one time. In an era where much of the world is focused on technological advancement, when war looms on the horizon, when social media diffuses human connection – the Esalen ethos truly seems more relevant now than ever.

Guests – some who even pay out of pocket to work on the campus – all arrive in search of something greater, a greater meaning and a deeper connection.

Here, there are no yesterdays.

No one cares what you do for a living or why you’re there. When someone speaks to you, they look into your eyes and not down at their phone. Conversations are meaningful, just as is their role in the Esalen ecosystem, even if short lived for a weekend.

They come from across the globe – some for a day, some for a weekend, and some for months, many returning for multiple visits. With workshops ranging from creative expression to culinary arts, somatic practices and shamanism with titles such as “Archetypal Dreamwork” and “The Quantum Dynamics of Consciousness,” there’s always something new to return to.

As we cross a deep ravine on a rustic bridge, past the meditation hut, people pass us carrying umbrellas, notepads and yoga mats, heading towards the Yurt where I assume class must be in session. Everyone is smiling – even through the rain. We pass through the gardens where the smell of lemon verbena, sage and eucalyptus combine with the salty air to form a elixir more powerful and intriguing than I could ever recount.

We head towards the famed hot spring baths, where it’s rumored as one of the only 2 places in the world where three bodies of water converge – the Pacific Ocean, a river, and a geothermal spring – creating a pool of great energetic intensity and alleged healing power. Patrons of the hot spring baths abide by the ‘clothing optional’ rule, and I was no exception – I found the raw, primal nature of the baths to be exhilarating. Gazing out across the infinite blue horizon, one can’t help but feel small. It’s no wonder that some of the worlds most esteemed writers and philosophers, even entrepreneurs and astronauts have sought enlightenment from this enchanted isolated estate.

Maybe I was just caught up in the spirit of the day – the cool breeze kissing my skin in the steaming geothermal water, the smell of sulfur rich in the air. But I felt the fragments of my troubles and insecurities dissolve in those hot springs and for a moment, I felt it – I felt the connection.

Shortly after it was time to say goodbye. We piled into the car and headed towards the exit. And as I drove past the gate towards Highway, I waved a final goodbye to the man in the yellow parka, and bid adieu to the baggage I was leaving behind.

Even though it’s been summer in LA since, well, always, the sweetest season of them all has finally swept the rest of the country…